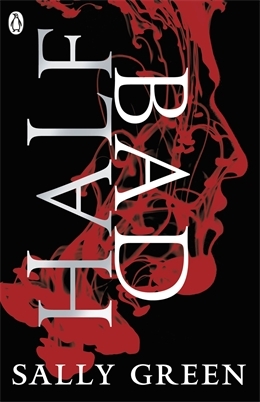 Half Bad by Sally Green is a breathtaking debut novel about one boy’s struggle for survival in a hidden society of witches.

You can’t read, can’t write, but you heal fast, even for a witch.
You get sick if you stay indoors after dark.
You hate White Witches but love Annalise, who is one.
You’ve been kept in a cage since you were fourteen.
All you’ve got to do is escape and find Mercury, the Black Witch who eats boys. And do that before your seventeenth birthday.
Easy.

I really enjoyed reading this!! I was buddy reading and it was so hard to put it down each day and wait to start the next section.

I liked the whole concept and the world building – especially the detail about the eyes, I found that brilliant. I didn’t like the casual abuse of a minor at first by the entire council and then by the white witch – though again I like that I don’t like it if that makes sense?! The way that white witches are supposed to be “good” but actually aren’t often reminded me heavily of both the Dresden files and the Alex Verus books, both of which I love, so that’s definitely a good thing.

I also love Nathan’s relationship with his gran, Arran and Deborah. Not Jessica though – omg she’s so evil and was desperate to trick him. When that was happening I really wanted to know more about why she felt so strongly – I know we got some but it didn’t feel enough to blame Nathan for it when it was nothing to do with him.

Onto the downside the only thing I really have is that Nathan is really your stereotypical “potential black sheep” and shunned by the community etc. Though it was nice to see annalise and arran stick by him.

Other than that, I found it very engrossing and easy to read, and without going into spoilers, I like where it ended up. What Nathan learnt, and who he was becoming.

I have already ordered the next book so hopefully will get to read that soon!

2 thoughts on “Book Review – Half Bad by Sally Green”