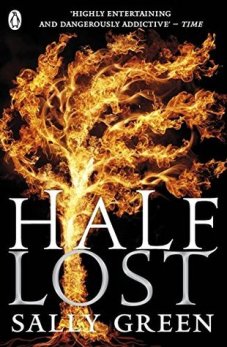 Nathan Byrn is running again. The Alliance of Free Witches has been all but destroyed. Scattered and demoralized, constantly pursued by the Council’s Hunters, only a bold new strategy can save the rebels from total defeat. They need the missing half of Gabriel’s amulet – an ancient artifact with the power to render its bearer invincible in battle.

But the amulet’s guardian – the reclusive and awesomely powerful witch Ledger – has her own agenda. To win her trust, Nathan must travel to America and persuade her to give him the amulet. Combined with his own Gifts, the amulet might just be enough turn the tide for the Alliance and end the bloody civil war between Black and White witches once and for all…

I am pretty conflicted about this book – I absolutely LOVED the ending and am so heartbroken right now! But the first 100 pages or so are hard to read – Nathan is like a different person and he’s a hard one to sympathise with. As always, Gabriel’s influences wins out. But he’s written in a way that’s quite hard to access.

However beyond that point, the story starts to flow again and really the last part is where it shines – I love who Nathan becomes as he is struggling to accept all the different parts of himself.

And the ending is simultaneously shocking and somehow inevitable, and one of the saddest moments I can think of.

Read my reviews of Half Bad and Half Wild