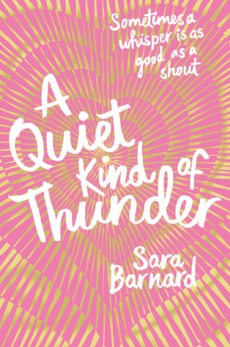 Steffi doesn’t talk, but she has so much to say.
Rhys can’t hear, but he can listen.
Their love isn’t a lightning strike, it’s the rumbling roll of thunder.

Steffi has been a selective mute for most of her life – she’s been silent for so long that she feels completely invisible. But Rhys, the new boy at school, sees her. He’s deaf, and her knowledge of basic sign language means that she’s assigned to look after him. To Rhys, it doesn’t matter that Steffi doesn’t talk, and as they find ways to communicate, Steffi finds that she does have a voice, and that she’s falling in love with the one person who makes her feel brave enough to use it.

I picked this up because I loved Goodbye, Perfect, and because Sara Barnard will be at YALC. And I am SO glad I did OMG.

This is not my normal sort of book. I don’t pick up a lot of contemporary, and when I do I often get frustrated by romance. So this romantic contemporary melting my shrivelled little heart was so nice haha! 😂😂

Let’s start with Steffi. I absolutely love everything about her. She’s got all these things going on and her brain is full of everything lying weevils (as dubbed by me and friends!) but she still keeps on trying even when it’s so hard. And she’s firm about stuff, not a push over, even when it’s about stuff her brain won’t let her do. Like wanting to go to uni. I admire her determination amidst huge self doubt. Her courage was hugely impressive, even if she doesn’t see it. She’s not flawless, and things with Tem show that (though I have a mini rant about that for anyone who wants to indulge me), but she’s trying as hard as she can.

Then Rhys. Sliiiiiightly more problematic but also beautiful and perfect lol. Problematic in that he doesn’t want Steffi to “drag herself down for him” (or something similar as he doesn’t put it that explicitly) but want to protect her and help her. Not okay! But it is talked about and it isn’t him being too weird about her but more a little of that mixed in with his brain also giving him a few lying weevils. PLUS he asked about touching her, was super supportive most of the time, and my absolute fav thing – supported her and Tem, and asked if they hated the boy when he didn’t show. I love that.

Tem and Steffi’s friendship felt real and lovely – solid and able to survive temporary holes. And I loved that Tem never seemed to regret her role in Steffi’s life, helping her.

And the parents! Good family relationships everywhere! 😱 yes her mum was a problem – she wasn’t supportive at all, but she did at least still car and love Steffi. And it seemed like she was learning. Her dad was so lovely too. As were all mentions of Clark, that broke my heart. And Rhys’s parents were awesome, and so accepting of Steffi. Just loved it.

I also have to mention the huge normalisation of a lot of things here – treating mental health with and without drugs, what said drugs can (and possibly could or definitely can’t) do, going to therapy, grief disorder, supportive family, trying but completely not getting it family, opposite sex friendships ( I wanted more of meg!). The list goes on! And the descriptions of selective mutism, anxiety disorders and the frustration that accompanied them was excellent – I felt as powerless as Steffi in those times.

I can’t talk for the deaf or poc rep but I though both felt well done – though I would have liked to have seen more of the poc side of things, it was nice to have it not described every time you see someone, or even be something you think about upon meeting them – so I choose to hope it is because Steffi doesn’t really see a difference. (If that makes sense!)

So anyway. I appear to have written a little essay, sorry about that! I really enjoyed this happy little book, and think you should try it out if you haven’t already 🙂