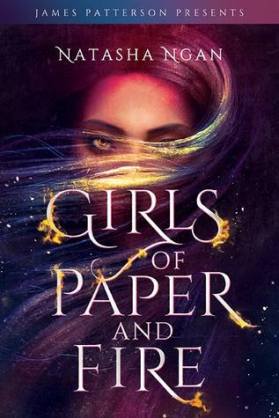 Each year, eight beautiful girls are chosen as Paper Girls to serve the king. It’s the highest honor they could hope for…and the most cruel.

But this year, there’s a ninth girl. And instead of paper, she’s made of fire.

In this lush fantasy, Lei is a member of the Paper caste, the lowest and most oppressed class in Ikhara. She lives in a remote village with her father, where the decade-old trauma of watching her mother snatched by royal guards still haunts her. Now, the guards are back, and this time it’s Lei they’re after–the girl whose golden eyes have piqued the king’s interest.

Over weeks of training in the opulent but stifling palace, Lei and eight other girls learn the skills and charm that befit being a king’s consort. But Lei isn’t content to watch her fate consume her. Instead, she does the unthinkable–she falls in love. Her forbidden romance becomes enmeshed with an explosive plot that threatens the very foundation of Ikhara, and Lei, still the wide-eyed country girl at heart, must decide just how far she’s willing to go for justice and revenge.

Oh wow. I felt I would enjoy this going in, but I had no idea just how well it was written and how much I would love it.

I will warm up front for a bit of explicit and shocking animal cruelty early on. I think it’s necessary to the story as it demonstrates the cruelty of the people and the system but it also felt unnecessary cause doggie!!

Aside from that, I really adored this book. From the friendships and relationships with the girls (but obviously especially Lei and Wren 💙) to the gentle handling of rape and abuse. I have never read anything like it. It manages to be explicit in how horrific it is but also doesn’t need to rub it in your face and is incredibly well done. It is a masterclass in how to write abuse in a sensitive nature.

I also loved the caste system and the different takes on the expectations on each part of society. Though in parts I wanted more on how it ended up that way, I think there’s so much more to come in figuring against it!

And that ending. Just so many things to discuss and I definitely CAN’T lol cause spoilers. I am on tenterhooks waiting for book 2.

Buy Girls of Paper and Fire from Amazon UK.

One thought on “Book Review – Girls of Paper and Fire”