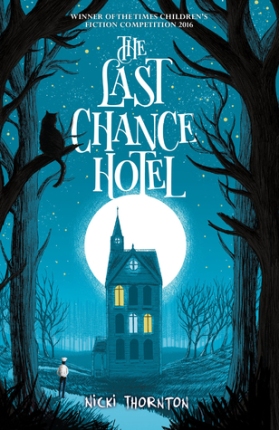 Seth is a kitchen boy at the remote Last Chance Hotel. His father has long ago left, leaving him imprisoned until he is old enough to set out on his own. If there’s any hope he has, it’s to be the greatest chef that ever lived… just like his father.

One night, a band of magicians begin to arrive to participate in a secret meeting — a Prospect Selection Procedure to determine the most talented magicians in the world, judged by their leader Dr. Thallonius. Seth has one task: to make Dr. Thallonius the greatest dessert he’s ever tasted. Then, maybe he will help Seth find a way to freedom.

But when the doors to the private meeting open, and Dr. Thallonius lay dead on the floor, the group blames the dessert, which means that it’s Seth who will pay the price. But Seth knows he’s innocent, and only has so much time to eliminate each suspect and prove his innocence.

This middle grade magical murder mystery was pretty good fun! For me, there was a little too much going on, and Seth isn’t always the best main character as he doesn’t know anything lol. Though that works as a plot device, it means you feel like you always want someone to just tell you what’s going on. He’s also a bit of a push over, and I’m looking forward to how the reveals at the end of the book will (hopefully!) change that.

And I loved Nightshade. Talking cat ftw. She helped with the gloriously spooky feel it had going on.

The magic warred a little with the mystery, especially as Seth was trying to sort out both, so it felt a little info-dump-y in places. But the both elements were good on their own, and I especially like the magical elements for how it all seems to work. I’m assuming there will be a follow up, and I hope we get to see more of that.

I’m giving this 3.5 stars, as it doesn’t hold up to the magic of Nevermoor or the mystery of The Lost Twin, but it does do both well, and it’s awesome and fun to see them combined.