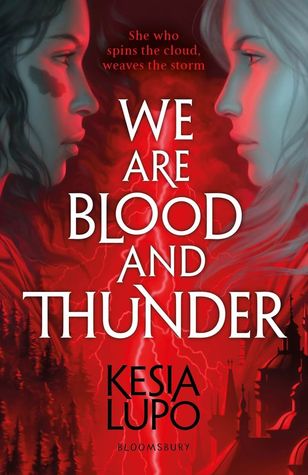 In a sealed-off city, it begins with a hunt. A young woman, Lena, running for her life, convicted of being a mage and sentenced to death. Her only way to survive is to trust those she has been brought up to fear – those with magic.

On the other side of the locked gates is a masked lady, Constance, determined to find a way back in. She knows only too well how the people of Duke’s Forest loathe magic. Years ago she escaped before her powers were discovered. But now she won’t hide who she is any longer.

A powerful and terrifying storm cloud unites them. It descends over the dukedom and devastates much in its wake. But this is more than a thunderstorm. This is a spell, and the truth behind why it has been cast is more sinister than anyone can imagine … Only Lena and Constance hold the key to destroying the spell. Though neither of them realise it, they need each other. They are the blood and they have the thunder within.

I really loved the concepts here – the storm in particular is brilliant and it’s great to see how it affects those inside and outside the walls.

There’s quite a lot of world building, and I love how the world grows as the book progresses. I find life around the castle fascinating too – disparaging magic, and power grabbing and banishing anyone different to be a cryptling. I’m really hoping to find out more about why there is such a disparity between the two communities.

I wasn’t overly surprised by a couple of the twists. I definitely guessed one of the main ones early, but I think you’re supposed to, really. The other – the caster of the storm spell, I guessed at but then convinced myself i was wrong! So that’s really well done.

I also want to see more on what happens next. – especially for Lena, but also for the Chaos mages, I found them intriguing.

This was a really solid and very enjoyable read, and I definitely recommend it.

Buy We are Blood and Thunder from Amazon UK.