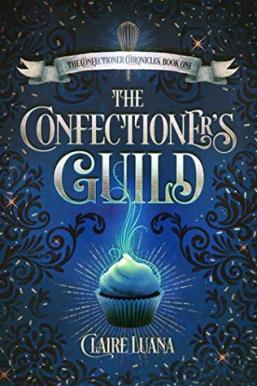 A magic cupcake. A culinary killer. The perfect recipe for murder.

Wren knew her sweet treats could work wonders, but she never knew they could work magic. She barely has time to wrap her head around the stunning revelation when the head of the prestigious Confectioner’s Guild falls down dead before her. Poisoned by her cupcake.

Now facing murder charges in a magical world she doesn’t understand, Wren must discover who framed her or face the headsman’s axe. With the help of a handsome inspector and several new friends, Wren just might manage to learn the ropes, master her new powers, and find out who framed her. But when their search for clues leads to a deep-rooted conspiracy that goes all the way to the top, she realizes that the guild master isn’t the only one at risk of death by chocolate.

If Wren can’t bring the powerful culprit to justice, she and her friends will meet a bittersweet end.

The Confectioner’s Guild is a delicious YA fantasy mystery. If you like spunky chefs and twisty mysteries with a drizzle of romance, then you’ll love Claire Luana’s scrumptious tale that’s sure to satisfy your sweet tooth.

I received this book from the publisher via Net Galley in exchange for an honest review.

I give the Confectioner’s Guild a strong 3.5 stars as it is a light and fun look at magic and conspiracies and romance and murder. Yes I just said fun approach to murder. 😂 but it is! It’s cleverly done actually – a murder mystery but also lots of baking and light fantasy. See? Fun! 😂

It did take me a while to catch up to what was going on, much like Wren, but I think it’s an approach that works. The baking is fun, and made me want to break my diet lol. The magic system is inspired as well, as is it all being a big secret. I like the way that all played into the conspiracy and crime aspects of it.

Wren is a hard character to get to know – we learn very little about her, and she is a little easily distracted by boys (ugh romance), but she is determined and focussed on getting the evidence she needs. Hale I quite liked originally, just because he was fun and silly, but I didn’t like him treating Wren like a play thing when she’d said no, and I didn’t end up liking him overall. And we don’t really learn enough about Sable to say anything. I think that’s my biggest complaint (other than romance lol) – you don’t really learn enough about any of the characters. Similarly with Lucas, he’s okay, but I don’t really see why Wren likes him so much. I did like his actions throughout though. And Callidus was probably the most interesting, even if his actions in the first scene are completely unjustified and stupid.

Given all that, I liked the set up and the tone enough to plan on reading book 2 – and I am definitely hoping for more of the political intrigue.